Random!  Why Mushroom Stuffing you say?  It's not Thanksgiving.  It's 100 degrees outside.  What brings about heating up a casserole-style dish today?  Simple.  Too many mushrooms in the fridge.  Maw admitted to being smitten by a large container of beautiful, round mushrooms.  A large container.  Almost two weeks ago.  All I needed to know, to begin the fretting about something going bad or going to waste on these premises.  And I don't always want sautéed mushrooms, which was one option we talked about.  We just had them recently and I don't even have anything in mind this week yet that might go with them.  So, into my head pops "stuffing."  Of course there's stuffing-stuffed mushrooms, but that wasn't my intention.  So I went looking around the internet for a recipe.  The first one I came across sounded pretty good, and I surprisingly had all of the ingredients.  Now I would publish the recipe from where I got it, but I did alter some measurements, so I'm only going to publish my version.  I was suspicious about one amount in particular (12 cups of bread crumbs!) and after reading the reviews, I think I agree with many who commented that that was a huge typo-style mistake.  Unfortunately, some of the folks who tried it in its original form were quite disappointed and had disastrous results.  Sometimes, you gotta go with your gut. Now I did cut the recipe in half, but still, 6 cups of bread crumbs?  No.
But all that being said, many did figure it out before it was too late and saved the dish.  A wonderfully savory, nutty comfort food dish.

Heat the oven to 375º and butter a 9x9 inch casserole dish.
Clean mushrooms and chop; melt 3 T. butter in a large skillet, then add the mushrooms, chopped onion and chopped celery.  Sauté 5-8 minutes and remove from heat.  Stir in the poultry seasoning, salt and pepper. 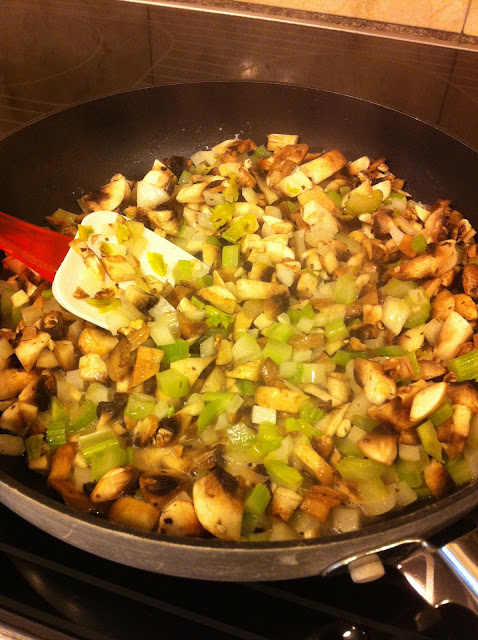 In a large mixing bowl, combine 2 cups of the bread crumbs, broth and beaten egg.  Add the mushroom mixture, chopped apple and parsley.  Mix well.  If it's really soupy, add more breadcrumbs till not quite so.  Remember, dressing is usually pretty moist when you first put it in the dish, and for a good reason. 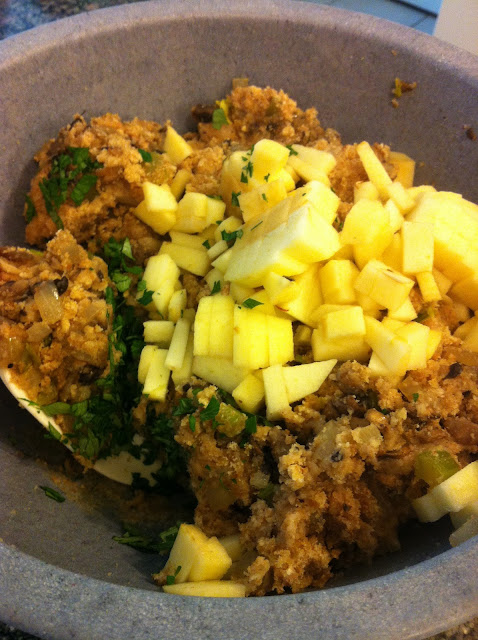 Put the mixture in the casserole dish, cut up and dollop the remaining 3 T. butter in several places on top and cover with foil.  Bake at 375º for about 45 minutes. Remove the cover and bake an additional 15-20 minutes longer to brown the top. 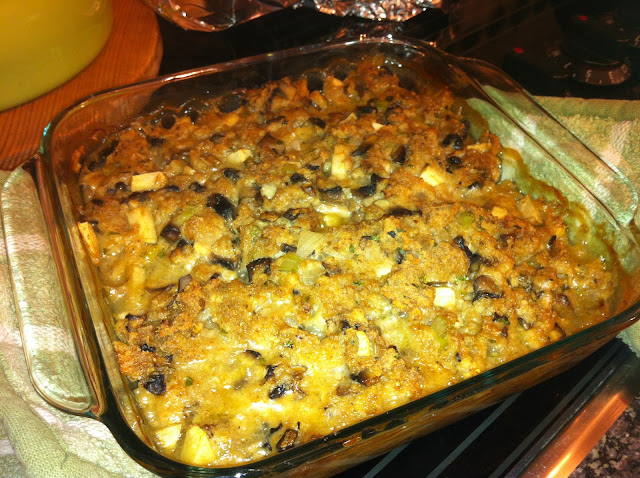 As with most things, let it sit for a few minutes before you dig in.  Really good.  A great one-pot-wonder version would be to add about a cup of chopped, roasted chicken for a full-meal-deal.  But this is great without it too.

A little comfort food in the heat of the summer.