Happy New Year! It's January 9th and we're having our first snowfall of 2011. Kind of exciting, since we seldom get any. And what does a snowy day in North Texas mean? Stay inside and cook--at least to me! Mother and I had the good fortune of having lobster tails last night for dinner, so we decided a bisque was in order for today. I don't have a regular recipe, so I went in search on the web and found Red Lobster's. The reason it won out was because it didn't call for sherry, where most do. And I don't have any. Of course, I made a few changes, but nothing substantial, and I did cut the recipe in half as we didn't have that much lobster left over. I also, unfortunately, didn't have the wherewithall to think to save the stock from boiling the lobsters last night, so I substituted chicken stock where it asks for fish stock. Otherwise, I followed it. Here 'tis: 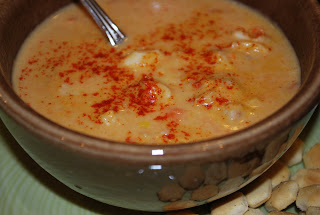 Chef's Tip: Adding a touch of brandy or sherry to the stock can bring a wonderful touch to this classic lobster bisque recipe.

I did use a Chardonnay and though it was perfect for the heavier body I was trying for. I will admit, I did not see the Chef's Tip (until it was too late) about adding a touch of the brandy to the stock, I think I would have liked that. Pays to read it all the way through, right!? Oh, forgot to mention, those oyster crackers--great tip from my friend Judy--toss the crackers in a bowl with a packet of Hidden Valley Ranch powdered dressing mix, and it makes them so yummy, without extra calories! Good for just snacking, or using in soups, bisques, etc.

On a personal note--today is David and Lauren's 1st wedding anniversary. So proud--love them!

Hey, I received a raclette party grill for Christmas, so my next post will be about our first attempt at raclette. Don't know what that means?--I'll 'splain it when I post. Thanks!
Posted by Alice L. Galipp at 2:14 PM No comments: