I'm in trouble for not posting for a while, but I promise I've been busy.  And I also promise that I haven't missed a meal.  So here are just some random pictures of food I've encountered, made, eaten, etc. lately. 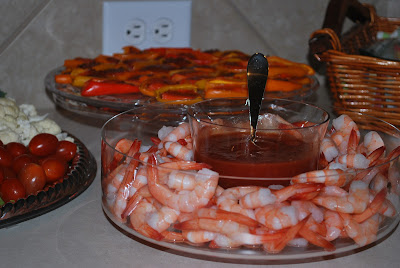 First of all, who doesn't like boiled shrimp with some tangy red sauce?  Okay, folks who don't like fish.  And behind the shrimp you'll see an easy appetizer--small sweet peppers roasted with port wine cheese ball smeared on them.  That's right, soften one of those port wine cheese balls you find in the gourmet cheese section at the store.  Cut the peppers in half (they're the small, sweet, multicolored ones you find in a bag in the produce section), clean out the few seeds and membrane, then smear about a teaspoon of the cheese on it.  Roast in the oven till light brown and bubbly, or if you're feeling lucky, place on the grill outside.  Watch out--they're hot!  Not spicy, but burn your lip.  Let them sit for a few minutes before partaking. 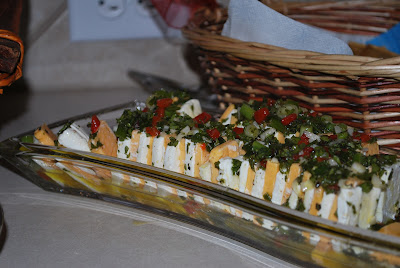 Pam's Marinated Cheese.  It's a thing of beauty.  My sister-in-law turned us on to this, and she still makes it the best.  Cheddar and cream cheese sliced and stacked together, with a beautiful, rustic Italian blend of ingredients make the dressing that you pour over the cheeses.  Marinate for a while, then set out and let get near room temp before you spoon the dressing back over the cheeses.  Eat with crackers.  Yum! 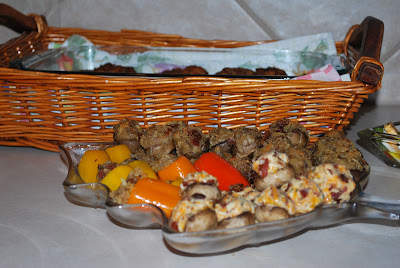 Even though this IS Super Bowl Sunday, I didn't mean for it to look like an appetizer feast.  These photos are coming from Christmas Eve, where David and Lauren hosted and we had a "finger food gala."  Here are two different kinds of stuffed mushroom my mom made, and sure enough, we had so much stuffing left over that some of those cute little peppers got stuffed as well.  The mushrooms in the back have a more traditional stuffing, while the ones up front have a bacon and cheese style stuffing. 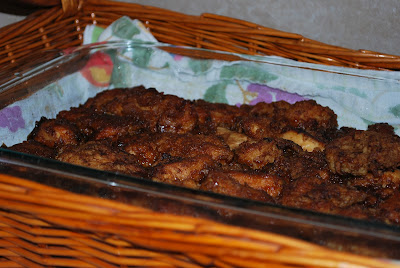 I'll stop here and resume in another post.  But doesn't it just make you hungry?