All Manner of Frittata

As I mentioned, I like to use my leftovers. For instance, this morning (and yes, inspired by a cooking show I viewed before getting out of bed), I made a frittata. When you look up frittata recipes--it's basically anything that can be held together with scrambled eggs. Usually, savory fare. So once you get the basic frittata down, you're possibilities are endless.
And I should mention right away, my husband will eat a frittata, and he won't touch a quiche. Fine--don't have to go through the trials of making a crust, and it cooks in a lot less time.
So I found myself in my pj's, rummaging through the refrigerator for what to put in it. Yes, pj's and still with sleep in my eyes. Hey, I was RAVENOUS! I told my husband so when I vaulted out of bed. He reminded me later.
I found last night's roasted chicken that I had already 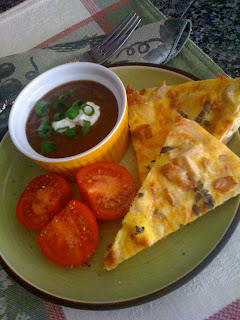 de-boned (yay for me for thinking ahead!), a third of a pound of uncooked bacon (I'll post about what I did to the previous 2/3 of the pound later) and of course, yummy sweet onions.

Preheat the broiler, leaving the rack in the middle of the oven.

Blend the eggs, Parmesan, salt and pepper in a bowl with a fork. Set aside. Cook the bacon pieces in a 10 inch skillet till crisp, remove to a paper towel and set aside. Reserve a couple of table spoons of the bacon grease in the skillet and throw in the sliced onions. Just get them translucent, turn down the temp to low/medium and add the egg mixture. Work the eggs around a little until they start to thicken and add the bacon and chicken, stirring it in evenly and then leaving it all alone once bottom of the eggs set. Remove from heat and sprinkle the thyme on top. Put the skillet in the oven (remember, it's on broil) and keep watch for the eggs to start to lightly brown. Remove from the oven and run a spoonula around the edges so you can slide the whole thing onto a plate. Let it sit for just a minute and then cut it into 6 wedges. Serve immediately. You can add whatever veggies you have in the fridge, whatever meat or fish you've got--again, endless. Sorry that my measurements aren't precise, I eyeball a lot of savory stuff. I do love cheese, so I tend to put more than necessary in just about everything. You could use parsley in place of the thyme, and if you don't have fresh, just use a little less of the dried--you could even blend it into the eggs previously.
This was a pretty good combo--and again--husband ate it without blinking. (The picture includes fresh tomatoes and black bean soup--another recipe my husband made last week that I'll share soon!) LOVE savory in the morning!
So that's how the leftover/startover thing works for me.

Happy munching!
Posted by Alice L. Galipp at 1:00 AM