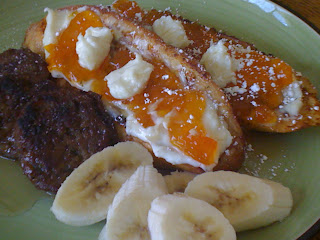 I love Sundays, if not for anything but the meal possibilities. Sundays are usually a little laid back and I'm not on a schedule to "make a meal." I was expecting some family today, but alas, regular weekend stuff got in the way--but I still followed through with my Sunday Brunch menu. I usually like to come up with something different than Saturday's menu--so it ends up being sweet. Today, I pay homage to one of mine and Don's favorite characters, Heather Anderson. She owns the Bed & Breakfast we frequent while in the Hill Country of Texas, near the Pedernales Falls State Park entrance, Anderson's "A Room with a View." We've been going to Heather's since our children were little, like for 20 some odd years, and she's never let us down on anything--especially breakfast. The thing is, you can forgive a lot, but when it comes to a "stay over" kind of place, breakfast is key. And Heather knows what she's doing, in the most subtle of ways. She doesn't even ask us anymore what we want. She knows--savory on Saturday, sweet on Sunday. It's a given when I call her and reserve the weekend. And Sundays are this: her "Stuffed French Toast." It's just awesome. I have recipes of hers. Scones, all manner of stuff. But this is a mystery I like to try to solve, and don't care if I ever can. So here's my rendition of her beautiful "Stuffed French Toast."
The night before (or even a day before that), get a loaf of day old french bread. Don't slice it yet. The morning of --slice it--thick. Get at least eight slices out of it. Leave it sitting out for a while to make it "stale." It's a beautiful thing.
Okay, choose your meat. Bacon or sausage. Whatever. Just pick something fresh and good. Get it cooked and in the oven on a warm platter while you're making your toast. 230ºF oven. Put another platter in the oven to put the toast on for when you get it ready.
Make one breading station of just eggs, milk or buttermilk, salt, a little pepper, cinnamon sugar and nutmeg. Mix with a fork in one dish--it's an easy french toast, after all. Heat a 10-inch skillet on medium heat with a pat of butter (like, 2 tablespoons) in it and immediately get as many of the bread slices in there as is can handle--don't overcrowd. Get the toast browned without burning on the bottom, turn and cook till almost the same color--then move to the platter in the oven. Keep going till you're done.
In a bowl, mix a couple of spoonfuls (heaping tablespoons) of whipped cream cheese and a couple of tablespoons of powdered sugar, heat in the microwave till creamy--maybe 30 seconds to a minute. Keep handy.
Set out a jar of apricot preserves, and heat some good maple syrup.
Assembly--
place 2 or 3 pieces of french toast on the plate, spread cream cheese mixture on each piece, then a layer of apricot preserves. Layer the pieces and then drizzle warm syrup over all, including over the protein (bacon or sausage) you chose. (Who doesn't like syrupy sausage?) Shake a little powdered sugar on top and serve immediately. It' so sweet, but it's so good. Really.
Posted by Alice L. Galipp at 9:39 PM