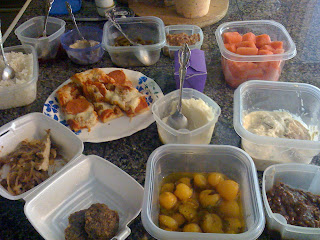 Or maybe it's a soup. Is there a certain size the "chunks" of food have to be in order to make it a stew? Or is it the consistency--but if it's thick, isn't it a chowder or a bisque? I'll have to investigate this and get back to you. In the meantime, today at lunch we had the perfect example of a "startover" moment. Maw and I agreed that we needed to eat up everything "leftover" in the fridge. So I pulled it all out and set it on the counter. Unfortunately, I was the only one who made a plate from the "spread" and there was still a lot left. Counter contents: white rice, mashed potatoes, pork sausage, chicken fajita meat, pizza, cranberry sauce, sausage gravy, chicken breasts in a mushroom gravy, cherry tomatoes that were baked last night in olive oil with garlic and fresh mint (it was awesome, served warm, smashed onto crostini...), canned seasoned green beans, refried beans and Chinese orange chicken. (There's cubed watermelon, but that was just to wash it all down with.) Oh yeah, and a little chopped B 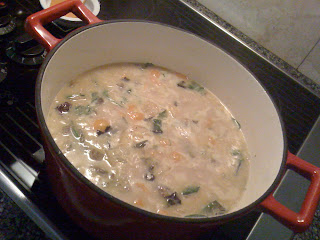 BQ beef. We decided it looked like the makings of a soup. Out comes the "Big Red Pot." I used the oil that the tomatoes were floating in to start sautéing some onions and celery. Once that was all translucent we added some chicken broth Maw made and added everything else (minus a few things), once we'd chopped some of the larger items into bite sized pieces. And, I forgot to mention, I found a container of salad (lettuce and tomatoes) in the fridge I hadn't pulle 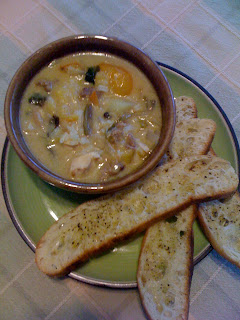 d out so I added that.
Items that did not make it in were the pizza, the BBQ, the orange chicken, the refried beans and surprisingly, the mashed potatoes. The two gravies made it thick enough so we decided we didn't need the potatoes. And yes, the cranberry sauce did go in.
Just heated it all through--didn't need salt because a lot of things had already been salted in their previous life, and added a little fresh ground pepper.
Tastes great, and served with that leftover crostini from the night before makes it "rustic." The chicken and the sausage complemented one another and the tomatoes gave it a fresh kick.
And now if we can't stand to eat it all up this time, it can go in the freezer for another day. A day that's not over 100 degrees, like today. I love leftovers and take them all the time in my lunch, but sometimes that gets old. Startovers make me feel better about not wasting food.
And if you're not into chunky, throw all that stuff in the blender and make a bisque, or a chowder, or whatever.
Posted by Alice L. Galipp at 6:06 PM